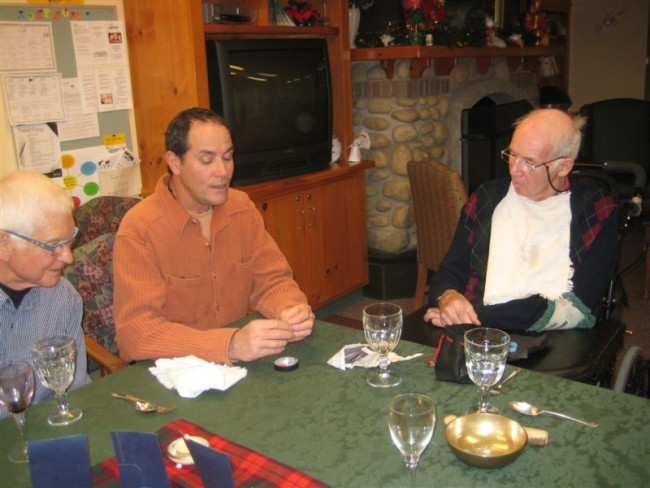 Overnight, my Dad went from having an independent life, to being paralyzed on one half of his body, and unable to care for himself in the simplest of ways. He was still alive, and still lucid and able to converse, but part of his life had died. It was traumatizing, for him, for our family, and for his circle of friends.

It took me a long time to deal with my own shock and grief. Finally, though, I had an epiphany. It was clear that my Dad needed support, soul support, and if there was anyone in his life who could help him, it was probably me. In many ways, this was the first step in my bringing my ritual skills to the realms of illness and death. I embarked on a series of rituals to help my Dad find peace with what had happened and to bring the larger family and community system back into balance.

In one of those rituals, I gathered my Dad’s community together, so people could come to terms with his new situation, and offer him their spiritual and emotional support. There was nothing physical that could be done for him, but he needed to know that they were with him, and they all needed a chance to tell him how they felt.

Over the Christmas holidays, we planned two dinners at the long-term care centre where my Dad now lives. To one dinner, I invited our extended family, and to the other, my Dad’s dearest friends, most of whom he’d known for more than half a century. I asked each person to prepare a gift, no larger than in inch in any direction, that represented what they loved about my Dad, or what they hoped for him.

After we’d eaten, I brought out the small leather medicine bag I’d made. I explained that my Dad’s death was more present to him than it had been before his stroke, and that he was thinking about his mortality. When we die, we can’t take our physical possessions with us: the only thing that matters then is the love and the relationships we have developed in our lives. We were going to fill my Dad’s medicine bag with tiny, potent representations of that love.

One by one, each person took a turn sitting beside my Dad and explaining to him what they were adding to his bag. The gifts were thoughtful and beautiful, and so concentrated with emotion and meaning. After they spoke, each person recorded their gift and its significance in a tiny book that fit in the bag. Even now, when I visit my Dad, we open that bag, sort through the gifts, and read the book. And he’s very clear: he wants to be buried with it.

(My dad died in 2017, and you can read the stories of how we navigated his death here)