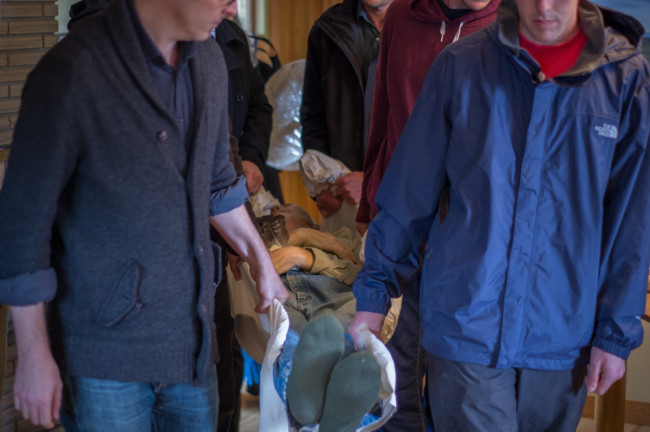 This is Kathleen Charpentier's story about the rituals I led with her family around the death and funeral of her husband, Richard Griebel.

I'm grateful to Kathleen for inviting me to be part of this journey, for her eloquent description of the process, and for her commitment to giving Richard a good death. It was the last great lesson he wished to give to his 4 children, and it was a beautiful one.

Thanks also, to Richard and Kathleen's nephew Andrew Walsh for the photos.

My husband Richard died of thyroid cancer at nine in the evening on Friday, May 16th, 2014.

He died in my arms, and I kissed his eyes shut. It was beautiful.

We never left Richard that night. About two in the morning, his brother Bob came, and his sister Rosemary and her husband Richard, and my son Mark, and my daughter Tess and I, we bathed the body and dressed Richard. It was a beautiful, beautiful night. There was a chorus of frogs coming through the window, and moonlight, and it was starry and beautiful.

About three o’clock everybody else went to bed, and I just laid beside Richard, and Tess curled up on the other side of me, and Ginger the cat curled in between us, and I laid with him and slept till about five in the morning. And then my new day started.

I have to back up a little bit here. A few weeks before Richard’s death, Sarah came to talk with us. Richard toured her around our farm, and he showed her the Rock and the cows. She got a real feel for who Richard was, what he stood for and what we wanted. 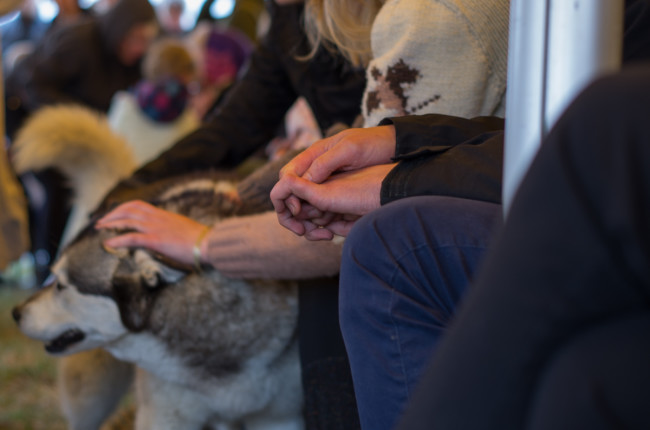 The Rock is our sacred ground on the farm. We gather there for poetry readings, we drink champagne at the Rock for Christmas, and my niece got married at the Rock. We knew we wanted to have a ceremony for Richard at the Rock, and I knew that as a family we could do that.

But Richard told me he also wanted to have a community ceremony, because he wanted to have the opportunity to say goodbye to his community, and for his community to say goodbye to him. And that, I did not know how I was going to conduct. I didn’t know how I was going to be, whether I’d have the wherewithal. So when I connected with Sarah, I knew I’d found somebody who could conduct the community ceremony for me.

She helped me with so much more than that.

She gave me the information and the supplies I needed to care for the body. She helped my friends know how to help – as she says, it takes a village to bury someone. And everybody just took on these tasks. It was such a community-making thing that happened. People took on the tasks of getting chairs set up and then taken away again, someone else took care of setting up the sound system, my sister did big pots of flowers – everyone just looked after all the details. 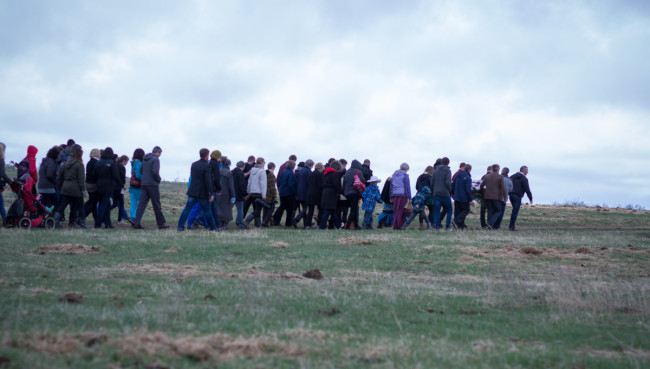 My son Ian and Richard’s brother Bob built a – we called it the prairie canoe - for Richard’s body. It was made out of poplar branches, and then they stacked spruce boughs on it, and then laid a bison hide over it, and we carried Richard to the Rock. It was beautiful to see Richard at the head, and the men coming in, flowing in and out and taking their turns bringing the body to the Rock. 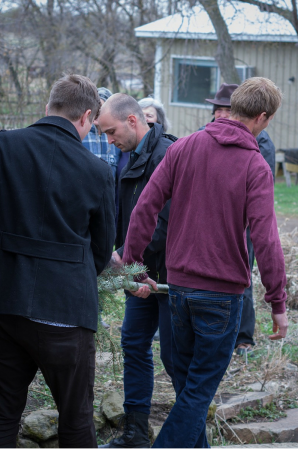 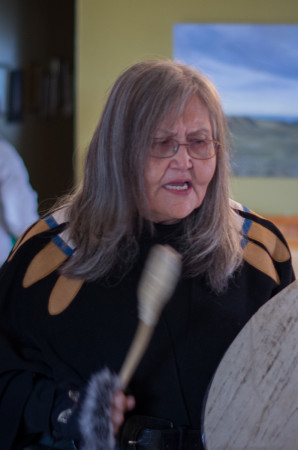 Our friend Marjorie, who’s First Nations, drummed for us – in his wishes, Richard said, “Kathy, make sure Marjorie drums at the Rock.” And so Marjorie and my daughter Tess drummed behind Richard’s body as we carried him in his canoe to the Rock. And there was a huge trail of people following behind, and we laid Richard’s body on sawhorses in front of the Rock.

The ceremony was so thoughtfully put together, and I thank Sarah for that. Some of us had specifically thought about what we wanted to send with Richard in his canoe, and we spoke that, and then everybody else followed through, and there was a basket of sage, and we just took our time and said our goodbyes to Richard and tucked the sage in with the body. I could feel Richard’s spirit with us. 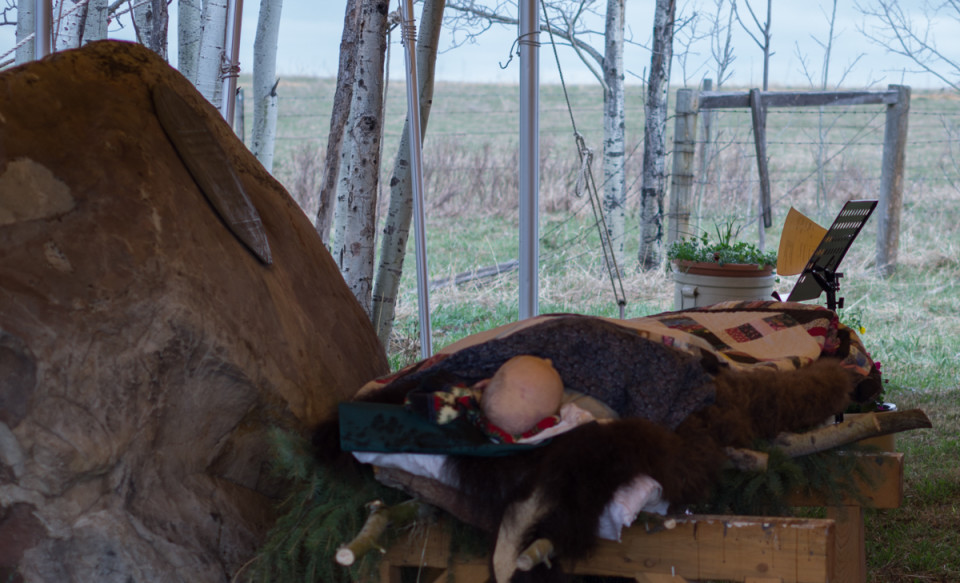 A really amazing part about what Sarah did – this was not on my radar, but she performed a ritual with rattles to release his spirit. I believe we have chakras and an energy system in our bodies, and Sarah unwound Richard’s chakras. And when you unwind the chakras, it opens for the soul to go through to the other side. 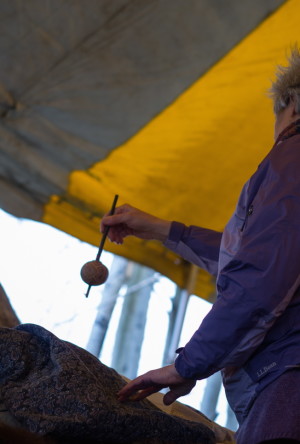 Anyone there will tell you they felt it. And when we carried Richard back to the house, I could tell Richard’s soul had gone – it had left the body.

My youngest daughter Tess, she’s 24, she really took on this looking after Richard’s body. She directed us in the bathing of the body on Friday night, and she was very insistent that the body never be left alone. We didn’t know how people were going to react to the body being in the house, but you know, everybody took a turn. At one point I saw Richard’s brother in there by himself, just reading to Richard.

It created an opportunity for people to be with him. It was private, and yet it was fun, and there was so much laughter. When we came back from the Rock we had a big potluck, and I sat in the room with Richard, and outside there was just this outrageous laughter going on. We had champagne when we came back, and huge toasts to Richard, and I was sitting in there, and I was thinking, “Oh my God, Richard, you would so love this happening!” I couldn’t believe the laughter. My husband would have been so happy that everybody was having such a great time. It was a joyous, joyous celebration.

Saturday night was the storytelling circle for our family – about 30 or 35 people. Sarah conducted it in a ceremonial way that really created a space of listening. She had these stones, and a person would pick a stone and hold the stone in their hand and tell their story about Richard – abut what they loved about him and what they would miss about him. Only one person would speak, the one holding the stone.

So we’re in a big elongated circle of people sitting on the veranda. But somehow, there was an empty chair amongst us. And we all started to really acknowledge, Richard’s with us, he’s sitting in that chair.

And that’s how she prepared Richard’s eulogy for Sunday. She got to know him through those stories. 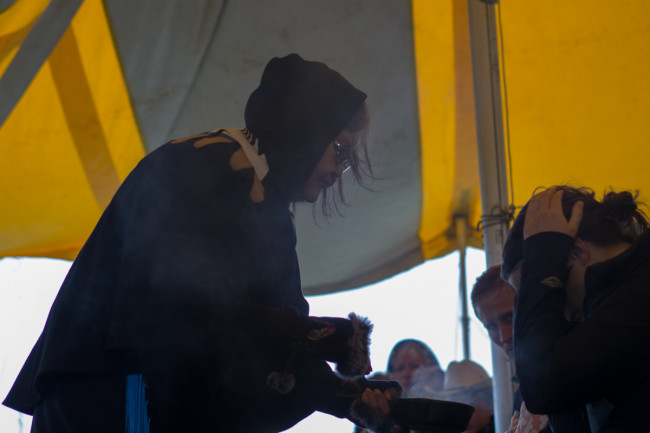 On Sunday, Sarah conducted the community celebration for about 350 people, and did very beautiful eulogy for Richard and a wonderful program. Just the other weekend I saw one of the young fellows who was there, and he said, “Kathy, it’s not often you leave from a funeral where you feel so uplifted by life.” And Richard really believed that. He said that you must live your life deeply, and you need to also embrace dying deeply. It’s all part of the same thing.

I had it in my mind, my commitment and what I stood for and what I wanted to do for Richard, but I didn’t know how we were going to do it. So it was wonderful for me that I connected with Sarah, because she could fulfill upon the ceremony and the ritual, taking the direction and order of it and having it come to fruition. 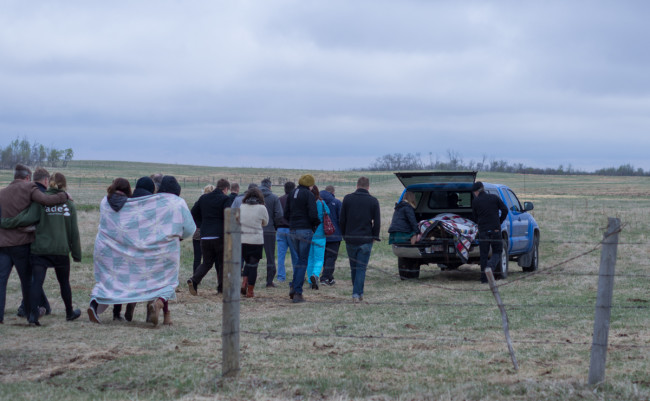 Sarah had very specific ritual and order and story-telling around taking Richard’s body to the Rock, and the ceremony that we held at the Rock. And then again, she was very instrumental in conducting our ceremony for Richard for the community. She organized it all, talked to those who were doing the music, and where that would come in, and who was doing poetry, where that would come in. And she did a lovely, lovely job. It’s because she’s relaxed and so okay with dying. She’s shamanistic, so she gets other realms.

It was all so healing. I’ve had grief. But it’s also been peaceful. And I think these things contribute to the healing of our grief, you know?

I’ve been with my husband since I was 19. We were married 33 years, and honestly, I did everything with this man, everything. Our business was together, we travelled together, we raised our children. He was a remarkable, remarkable soul. And I’m talking about this today, on his 63rd birthday.

When all was said and done, I feel like I powerfully fulfilled upon Richard’s wishes, and that really means something to me. I guess Richard and I have stood for things for all of our lives, and this was just one more stand. 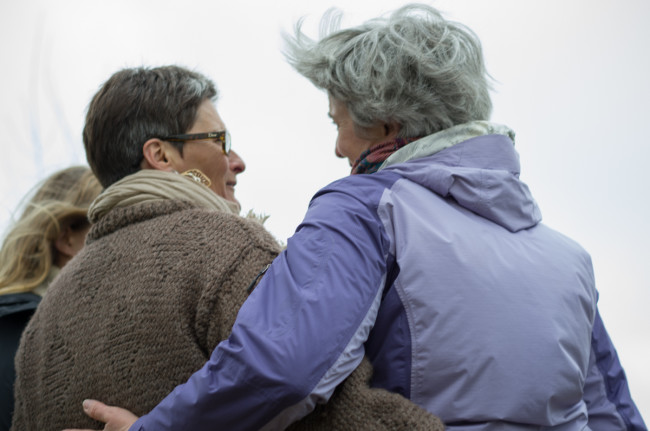