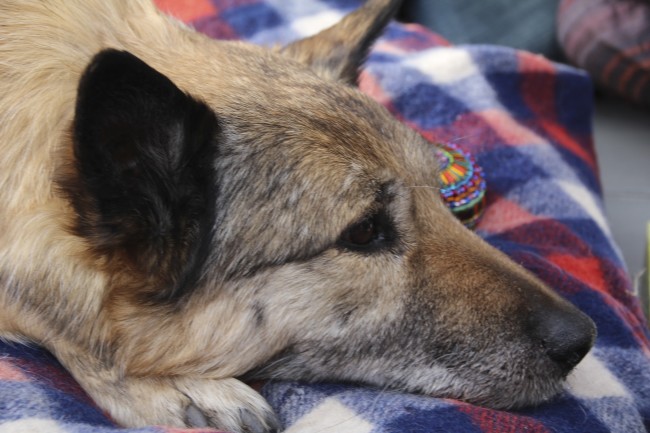 This story was written by Leslie Gotfrit, after I facilitated a ritual to support the euthanizing of her family's dog, King.  Many thanks to Leslie for sharing it here, and to her daughter Josie Bauman of Not Your Average Jo Photography for the beautiful photos.

King was an active dog, and when he stopped running along the trails we knew something wasn’t right.  A couple of vet appointments and a blood test confirmed acute lymphoblastic leukemia, an incurable disease.  His downward spiral was steady and quick, mercifully painless. It was only a few weeks from diagnosis to death.

I had been told it would be clear when it was his time, and I did know, with surprising conviction. When King no longer responded to me, I knew I had to help him die with grace.

That blessedly warm Sunday morning, I contacted Sarah.  I had no idea what I wanted or needed or even what she actually did. All I said was that I wanted to make my dog's passing sacred.  “How do I do that?" I asked.  Sarah knew and her compassion was as valuable as her knowledge.  I don’t remember her first words, but Sarah somehow conveyed the message that she would be there with me as well as for me; I had nothing else to do but be with King.  Immediately the tears came.

My husband, Paul, was out of town and Sarah stepped into the role of loving support with wisdom and kindness.  She promised that she would lead the small group of King’s best human friends in a ritual that would open up the space as sacred.  My trust in her was complete, and my relief enormous, from the moment that I gave her permission to create that sacred space for King’s passing.

Sarah called me many times that long day, gently giving me a small direction or an idea.  "Call someone to come help you" was an early phone call.  Then, "ask someone to get flowers.”  When I expressed my concern that King’s final hours would be turned into a party, Sarah was able to reassure me of the value of having friends beside my children and me.  She assured me that our last moments with King would be sanctified while embraced by community.

Somehow Sarah enabled me to fully experience my sorrow, make wise decisions and delegate details to others.  I only remember the day with overwhelming love, sadness, meaning and peace.

Sarah suggested a vigil overnight with King, something done in many cultures, and she let me know to start some ice packs in the freezer and to find a special place where he could be undisturbed.  She parceled out instructions and ideas slowly, one at a time, allowing me to absorb new suggestions.  Each phone call brought me to tears, of relief as well as sorrow.  King and I were not alone. 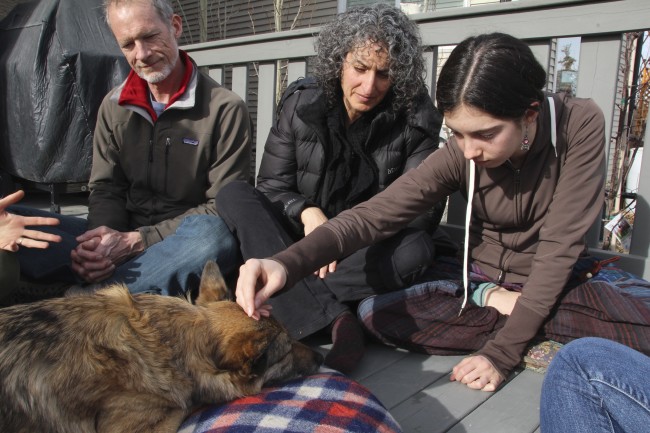 When the actual time came, I was relaxed and present and ready.  We gathered closely in a circle on the deck, sitting on pillows around King who lay on a blanket on his bed, our knees and arms touching, the sun still warm.  The ritual began around 4:30 with the arrival of our veterinarian friend Sandie who was responsible for King’s body’s departure, while Sarah was facilitating his soul’s transition. 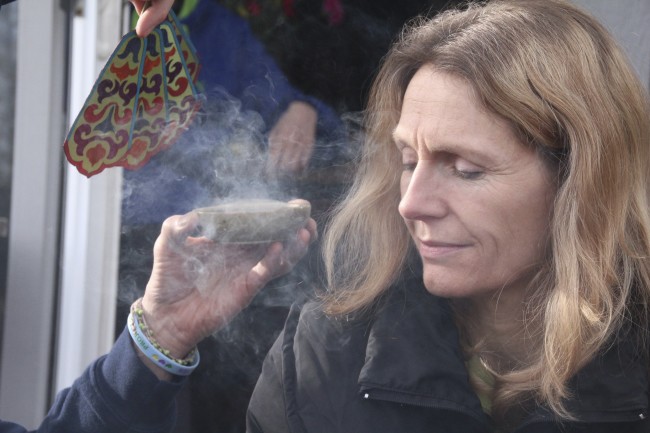 We smudged each other carefully with white sage, a fragrant meditative circle of care.  The outline of the ritual was not complicated.  There were moments of storytelling, of recalling why King was so beloved by so many, of other animals we have lost and who would be waiting for King.  An Ojibwa story of the boat we were creating from love that would carry King across the lake to his next home provided the framework that lifted our stories and tears into meaningful process.  There was a chance to say words about King, and about other loved pets who would be helping King transition. Sarah had made a small cloth bag to be buried with King and we all added a small token to it for King. 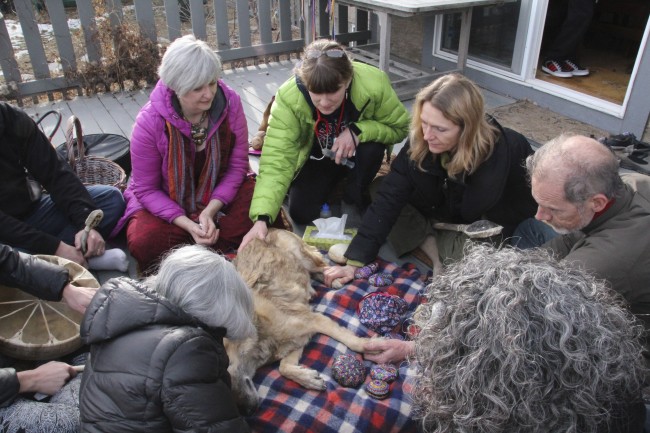 Sandie explained what she was doing as she administered the two drugs that would first sedate King and then stop his heart and breathing. 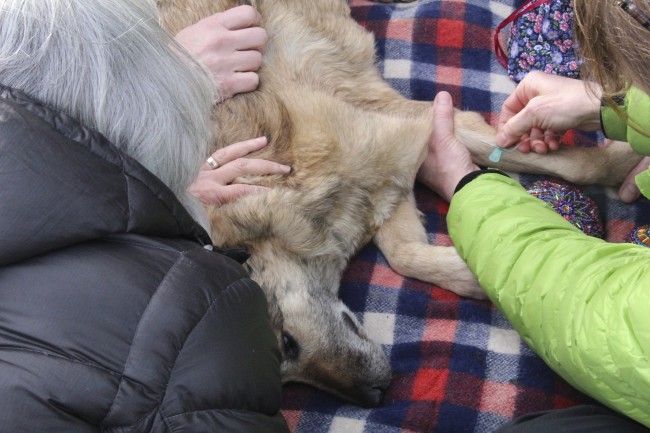 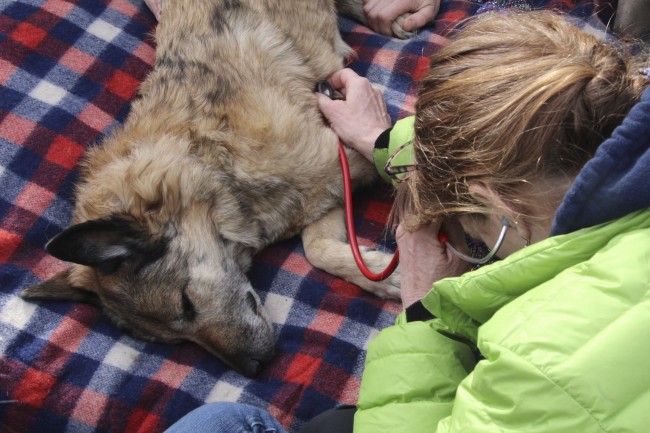 It took several long minutes for King to draw his last breath and I lay beside him, holding him and weeping. 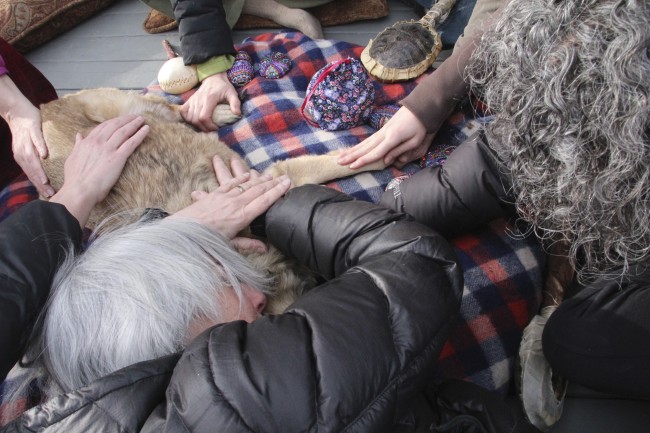 As we sat with King's body, and began adjusting to his death, Sarah performed an energy healing process with her rattle, releasing King's spirit from his body.  King was a reserve dog, adopted from an Aboriginal family and we honoured that by using traditional skin and turtle rattles made by my son’s Cree grandmother.  We all chanted and shook the rattles to help his soul journey onward. 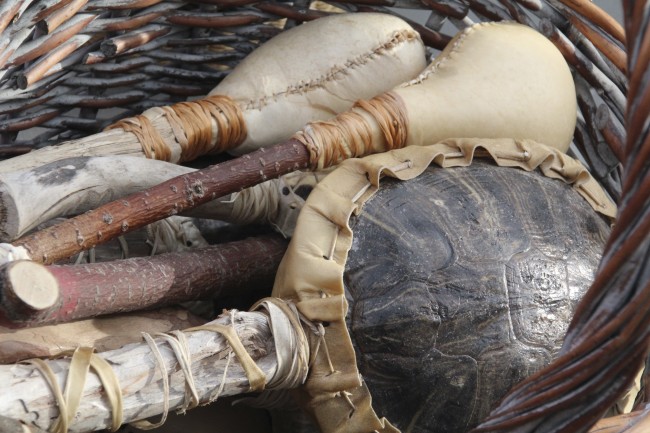 Shortly afterward the sun disappeared and it became cool and time to go inside.  We moved King to a quiet place in the house and gathered to eat hard-boiled eggs, a Jewish symbol of the continuity of life, to drink tea and talk.  Later, a full moon rose, yet another marker of the perfection of all that happened.

I wanted my two teen children to experience death as beautiful and sacred, and King’s death was both.

Sarah held the day, even before she arrived, in a way that was both unobtrusive and central.  She created an amazing atmosphere of love, sanctity, and community.  Rituals matter.  There was nothing irrelevant--every moment was meaningful and accessible. It was  designed to help King die as well as to help the humans transition to life without King. 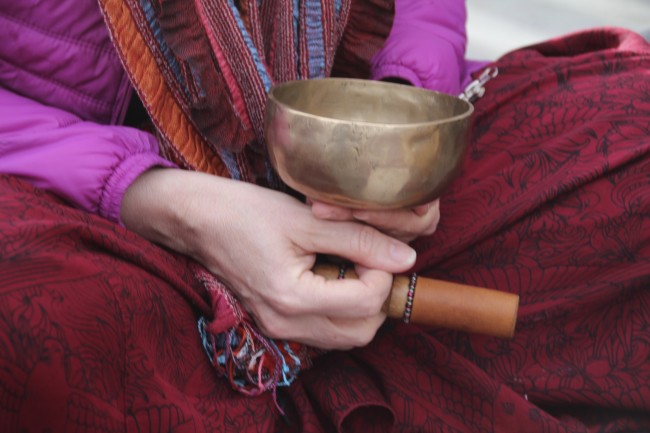 Our gathered friends were given the gift of a space where we could mourn King's passing deeply and together.  He was a beloved dog and very much a part of these people's lives.  I am so grateful that Sarah knew what we needed even if I didn’t.

Sarah created the space that allowed me to really grieve, to weep from deep inside, to lie beside my faithful King and just be.  I truly felt that we gave King a gift by helping his soul traverse from living to dead, to leave his beautiful body and go peacefully.

The next day I felt light, sad, but not wrenched.  There were tears at moments but the day before had been healing; King's soul was exactly where it was supposed to be at that moment in time.  I understood the idea of transitioning in an embodied way for the first time.

Gratitude to Sarah and my community soothed the hole in my heart that was King.  He had been a blessing to us and continues to be a source of love inside me.

Thank you, Sarah, for your big compassionate heart and your baskets, both metaphoric and real, of rituals, tools and beautiful objects.  Your many gifts are a blessing in a world in need of healing. 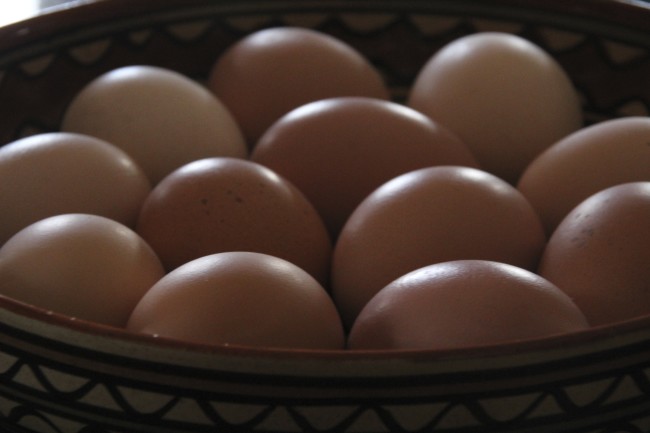