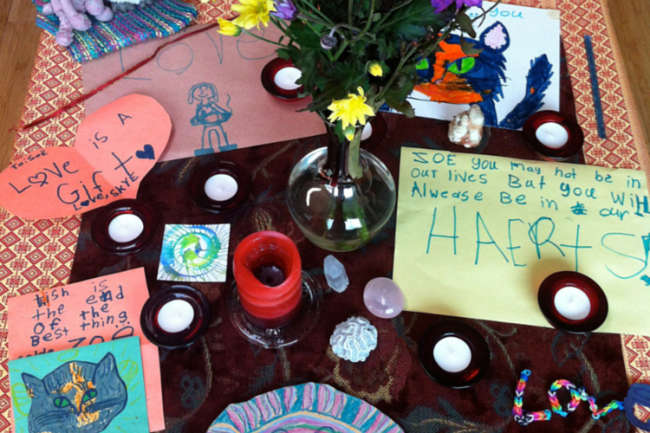 Lisa and Marie were nine-year-old twins. Their mom, Molly, called me one day because Zoe, the family’s almost-20-year-old cat, was in her dying time.

Zoe had lost weight, and her body was clearly shutting down. No one knew how long she would live but, in a couple of days,  Lisa and Marie were heading to Ontario to spend a month with their Dad. Molly was concerned that Zoe would die while the girls were gone and that they’d miss being able to say a full goodbye.

That evening we held a simple but beautiful ceremony, attended by Molly and the girls, a close friend, and Molly’s father. The family had just moved close to the river and spent lots of time in the park there, so we included the river in the ritual too.

We gathered in the living room, and set out our materials: two rhubarb leaves and a basket of multicoloured flower from my neighbour’s garden. After opening a sacred space and setting the intention of the ritual, we laid the first rhubarb leaf on the table. Then we went around the circle four times, and each person in Zoe's community offered their prayers. With each prayer, they placed a flower on the leaf.

In the first round, people spoke of how they loved Zoe; in the second, they thanked her for what she had brought to their lives; in the third, they spoke whatever was in their hearts; and in the fourth, they said goodbye. The words were profound and soulful, and the tears flowed freely.

When the leaf was piled high with prayer-flowers, and everything that needed to be said had been spoken, I placed the second rhubarb leaf on top, rolled the edges up, and stitched the package together with rainbow-coloured cotton cord. Then we took the bundle to the river, and with rattling and more tears and prayers, we launched it into the current. We asked for the bundle's strength and love to be there waiting for Zoe when she needed it on her voyage from this world to the next.